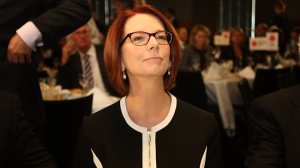 Louise hails from Queensland and Studies at the University of Queensland. She is the NUS Queensland State Environment Officer. She is a collector of tee-shirts and missing memories. However she is yet to learn how to vacate a shopping trolley without falling over.

I’m sorry that your prime ministership coincided with the worst of the national discourse. I’m sorry that as you paved the way, Tony Abbott, Alan Jones, and Howard Sattler tried to block the path for women. Even Germaine Greer was part of the blockade. I’m sorry that so many people gave credence to these people. It’s not much, but some of us cried and screamed and ranted. I’m sorry that we couldn’t destroy the joint. I’m sorry that our fight wasn’t limited to arguing with internet trolls. I’m sorry that we had to refute views published in the mainstream media just as often as we had to campaign to have a page removed from Facebook.

The depth of my sadness on Wednesday night was surprising to me. Honestly, I wasn’t your biggest fan in a policy sense. But, I wanted the opportunity to judge you on your policies – an opportunity which was consistently denied to me, and every other Australian. We wasted so much time talking about your shoes. As my housemates will contend, I spend enough time talking about my own. After we’d finished discussing your hair, your glasses, your clothes and your body, there were no column inches left to analyse your legacy. I wanted the Australian public to discuss why your government was wrong to process asylum seekers offshore. I wanted a national celebration when you introduced the legislation for the NDIS. Instead, we got endless speculation about whether or not your tears were authentic.

Once some blokes decided that you were ‘illegitimate’ as a prime minister, the rest of the bullshit flowed faster than twitter on a Q&A night. We know that 17 of Australia’s prime ministers first ascended to the top job after a party room spill or a vote of no confidence. Though your company in this respect includes Menzies, Curtin and Keating, you were the first to be labelled illegitimate. Menzies and Curtin, the most celebrated prime ministers from either side of politics, led minority governments for a time. Yet, we remember them as Australian icons, free from the indignity of being called illegitimate. Maybe 1940s Australia had a better comprehension of the Westminster system, or maybe 2010 Australia simply couldn’t resist the pervasive lure of misogyny to accept you as PM.

I will never accept the idea that Australia is not ready for a female PM. It gives us an out. It implies that only an advanced society could countenance the idea of a woman in charge. Those who peddle this line use some of my favourite things about Australia, to prosecute an argument which crumbles under the most superficial of scrutiny. We’re larrikins and bogans, blokes and sheilas. We abhor pretention and snobbery. We’d prefer to watch the big men fly at the G than spend the evening at the opera. But accepting a woman in the top job is not a matter of altering our national character. We don’t have to pretend to be something we’re not. We can, simultaneously, embrace female leadership and our own brand of national kulcha. Let us never say “a place like ‘Straya is incapable of keeping our misogyny in check. Sorry ladies.” That’s absolute crap.

It’s important for us to acknowledge the shit you put up with. Equally, though, it is imperative that we recall the progress you made. Thank you for calling out sexism and misogyny in our national parliament. We still refer to it as ‘that speech’. Some of my friends claimed to have given up on politics. They saw that video and changed their minds. Finally, we had a prime minister who told the nation that she wasn’t going to put up with it anymore, and we didn’t have to cop it either. You inspired us to deliver our own version of that speech. We have had far too many opportunities to follow your example, and call out sexism in our own lives  – whether we’re naming and shaming sexist cowards at NUS National Conference, or dancing at a nightclub where we’re forced to assert that no means no.

Now, I recommend that you grab a beer. Avoid reading the Australian and watching Bulldogs games (except on August 30 – they’re playing Melbourne). You’ve earned a bit of break. The rest of us can hold the fort for a while. As you said, it will be easier for the next woman and the one after that. Thanks for being the first.
Love, Louise

5 thoughts on “A Letter to the former Prime Minister”

Comments are moderated by the 2014 Women's Officer Georgia Kennelly. Abuse will not be tolerated. Cancel reply